At the beginning of September I got to travel with the Green Racing Project (GRP) biathlon team to the Lotto Thüringen Skisport-Halle, a ski tunnel in Oberhof, Germany. It was sweet. You may have heard a bit about this trip from Michaela Keller-Miller who was there with the GRP ski squad, but I figured sharing and discussing my training plan for the week may still be of interest. A major focus for the week, and one of the main reasons for getting on snow, was doing technique work. And because we wanted to have that technique mean something, we did it at speed, which meant lots of intervals and speeds. This training week left most of us pretty tired by the end, so keep that in mind if you’re thinking about how to incorporate any of this into your own training.

I’ve also included the dryfire sessions I did for the week which were written by our shooting coach, Ethan, who also has his own rifle stock and machining company. Biathletes do a lot of dryfire - shooting without bullets - to get extra practice with shooting fundamentals.

Monday AM and PM: Travel

We got stuck for a night in D.C. so Michaela and I ventured downtown via public transport to check out our nation’s capital. We probably could have written a travel blog about our experiences but not sure that’s the content the ski world is looking for.

International travel can be a doozy and I would share all the tips and tricks for doing it well, but my brother, Jake, already did that. His main suggestion that I incorporated for this week - morning walks to get sun in my eyeballs. 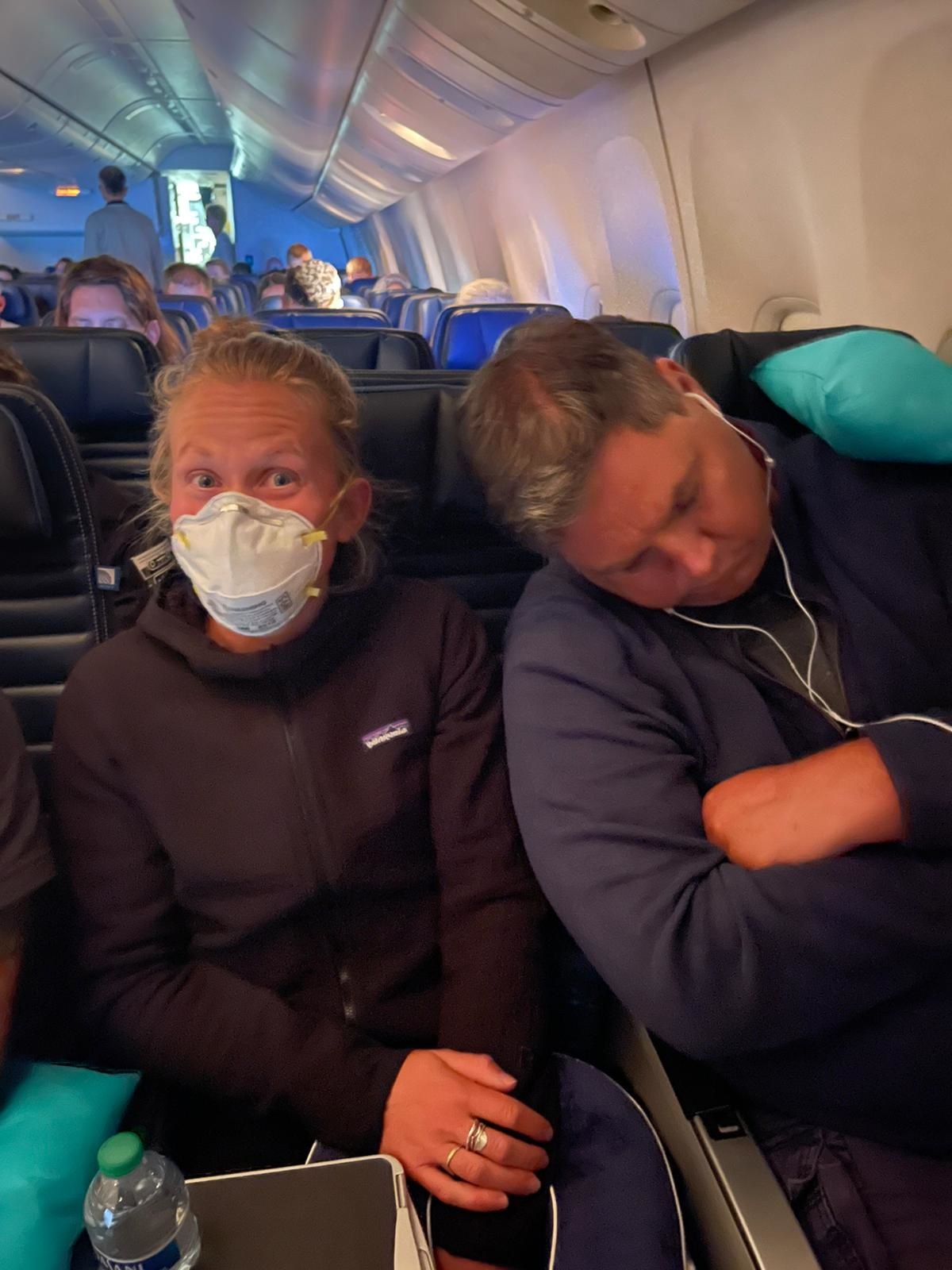 My teammate, Kelsey, made a new friend on our flight.

Skiing is awesome! This was my main takeaway from our first on-snow session. I love skiing. Gliding is amazing. I don’t care if I’m going around and around on a 1.5k loop inside what feels sort of like a narrow Minnesotan high school hockey arena. Skiing is a gift. We threw in some speeds to wake up our bodies after travel - about 10 speeds, 10 seconds a piece.

How cool is this place?

This L3 (threshold) session was mainly to get us ready for L4 intervals on Thursday. We did 30 minutes of continuous L3, trying to ski with the technique we’ve been working on during roller ski season. For me, this meant mimicking the upper body movement of double pole in my V2. Then we did 10 starts/speeds, 10-15 seconds each. For these starts we lined up against a teammate, then sprinted 15 meters forward, did a 180 degree turn around cones, and sprinted 15 meters back. Doing starts this way incorporated agility, cornering, and tactics into our speed work.

We joined the National Team for shooting games: two-person teams doing one-shot relays. One-shots mean getting into position, taking only one-shot, then getting off the mat. These are great drills for dialing in shooting position and getting in reps executing your shot process. Then, after a few easy jogging combos (combos mean with shooting) we launched into circuit strength. We did five rounds of 30 seconds on, 30 seconds off of five exercises with increasing intensity each round. In each 30 seconds off, we did a one-shot. This workout is really hard both physically and for shooting. Our coach likes doing circuit strength when we are traveling and when we don’t have access to a gym and/or when we’re looking for some extra “pop” in our skiing during a peaking phase. We did circuits here mainly for the former reason. 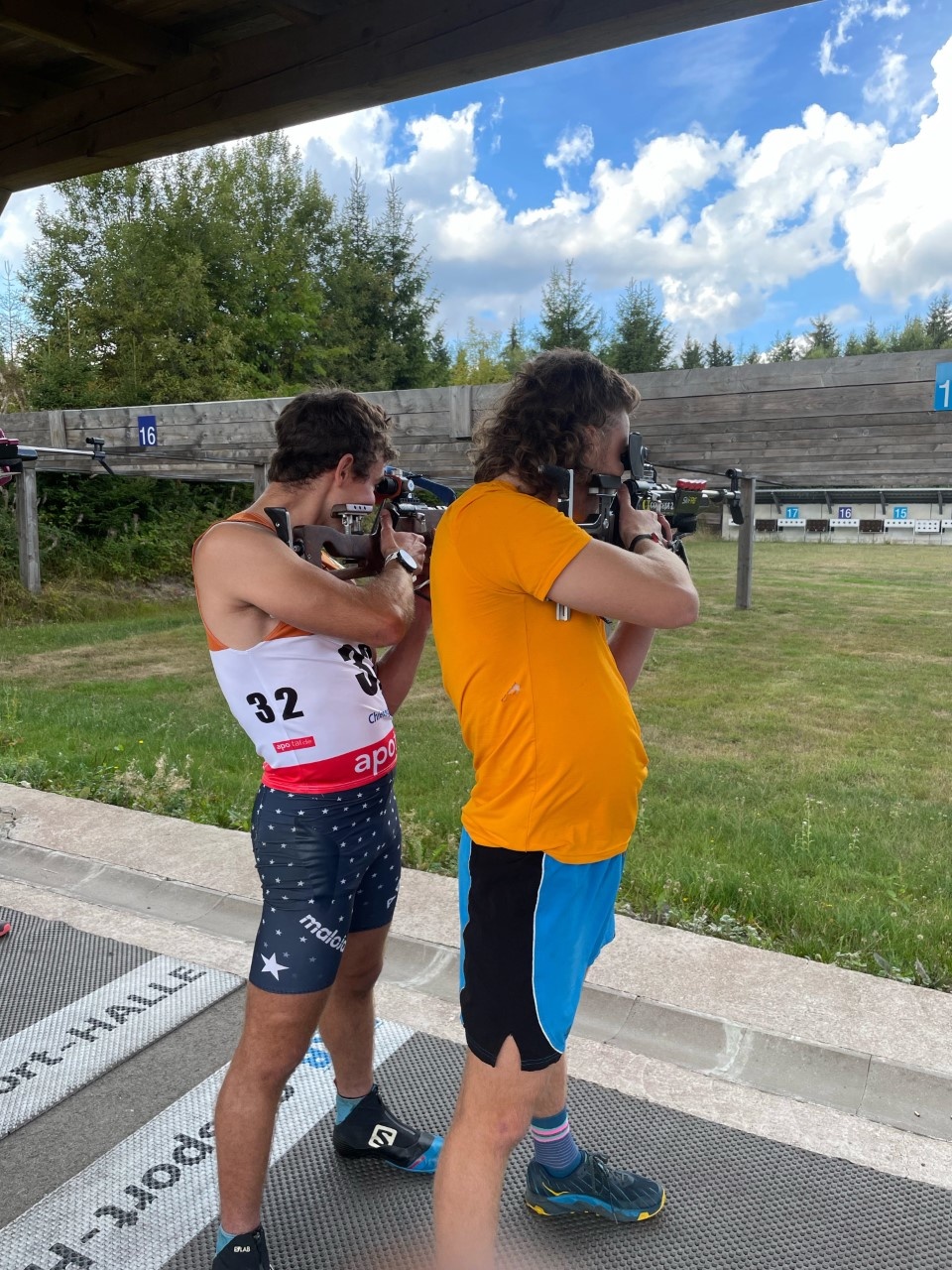 4x6 minutes L4 with 2 minutes of rest between each one. This was a pretty straightforward workout but I felt that it was really challenging to ski with the technique I wanted to. This was partly because of the snow conditions (the snow would get really choppy in the tunnel). It was also just my third on-snow session though so I tried to keep it positive.

Working through sloppy snow during L4

Easy shakeout run to work through the fatigue from the morning. There were really extensive running trails around Oberhof.

Hour long double pole in the tunnel - focusing on keeping hips forward at pole plant. Then 15 minutes one pole skating and 15 minutes V2. The goal with one poling is to look like you are using two poles. This requires stability through the whole body. I think I should do this more.

We got to do this shooting session at the Oberhof World Cup venue which has a big stadium that’s built into a hillside - it was super neat. We worked on natural point of aim by purposefully cross-firing (shooting on the wrong targets). Before we would get into position, Ethan would say right, left, or center to indicate where we were each supposed to shoot in relation to our point. We then used the targets we wanted to shoot as our reference point, rather than the mat, to determine our body position. I learned that keeping my eyes on the targets I was shooting during my whole set-up process really helps me achieve a more accurate natural point of aim. Oftentimes while setting up I look down at my feet, then at my magazines, and so on. Keep eyes on target. We finished with a pressure drill: starting on point 10, we had to hit one one-shot per point from 10-1 in a row. If we missed, at any point down the line, we had to start back over at 10. It took me a while but I did it and was proud of staying focused. 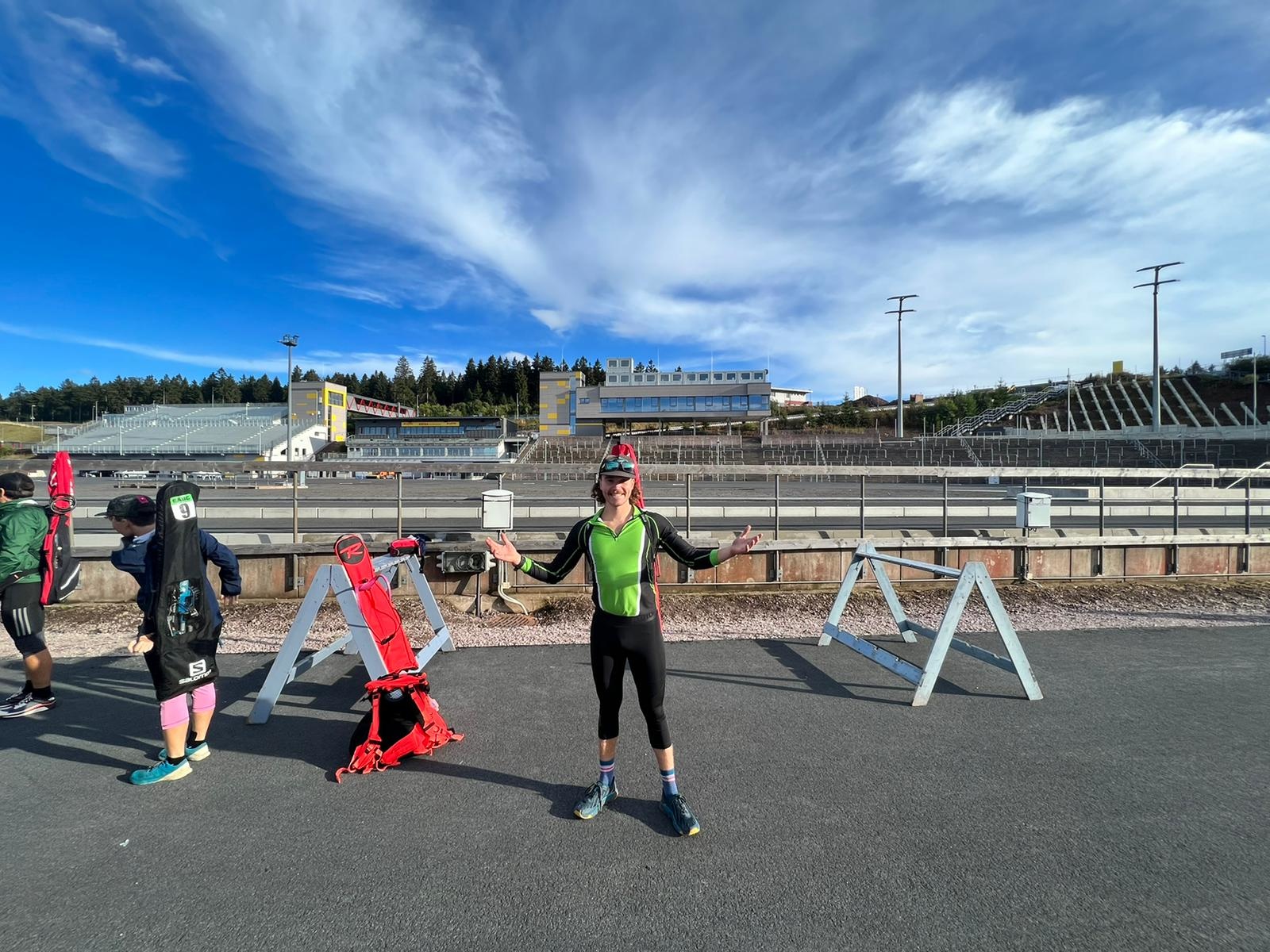 8x1min (or a bit less) L5 (full gas as the Euro coaches like to say) with 2 minutes of rest between each one. The first two intervals were up a gradual climb. The next four were up a V1 climb. The last two were up a short gradual climb then flat and slightly down hill. Changing up

the terrain for different intervals allowed us to train different techniques at high speed. And it went better than I thought!

We did the same type of circuit strength one-shot combos as earlier in the week. I was breathing really hard during the one-shots which was a great time to practice controlling the exhale that brings me onto the target.

Dryfire: 5 minutes breathing in position focusing on consistent target approach with exhale. Pay attention to sight movement for target approach. After the first 5 minutes, draw a line on your target that represents a smooth, idealized trace of your approach. Repeat the 5 minute hold working to trace the line onto your target with each breath. Adjust or redraw the line if needed. Then 2x2 minutes of shots, tracing your ideal approach.

Easy distance (2 hours) with some light speeds and tempos for technique. Working on leading the return with the hip - like doing a kettlebell swing (coming up and forward with the hips before the shoulders and upper body do). When I finish a stroke and am gliding over my ski with my hands and arms relaxed behind me, I often start the return, or forward motion, by bringing my upper body up and forward before my hips. It’s more powerful to have the hips drive forward first and have the upper body follow along.

Dryfire: 2x (5x 30on30off) of "overhold" on target. Set a timer for 15 seconds. Hold for 15 seconds as steady as possible on target, take a good shot, and continue holding through and after the shot for the next 15 seconds. Then rest for 30 seconds and repeat. Finish with 2 minutes of continuous shots.

And that wrapped up the week! It was definitely quite the experience to go train on snow in a ski tunnel for the first time. It’s a unique opportunity that should help my transition to on-snow training and racing in the next month. I hope that reading through what we did for our week on snow gives you some new ideas to incorporate into your own training. Have fun!